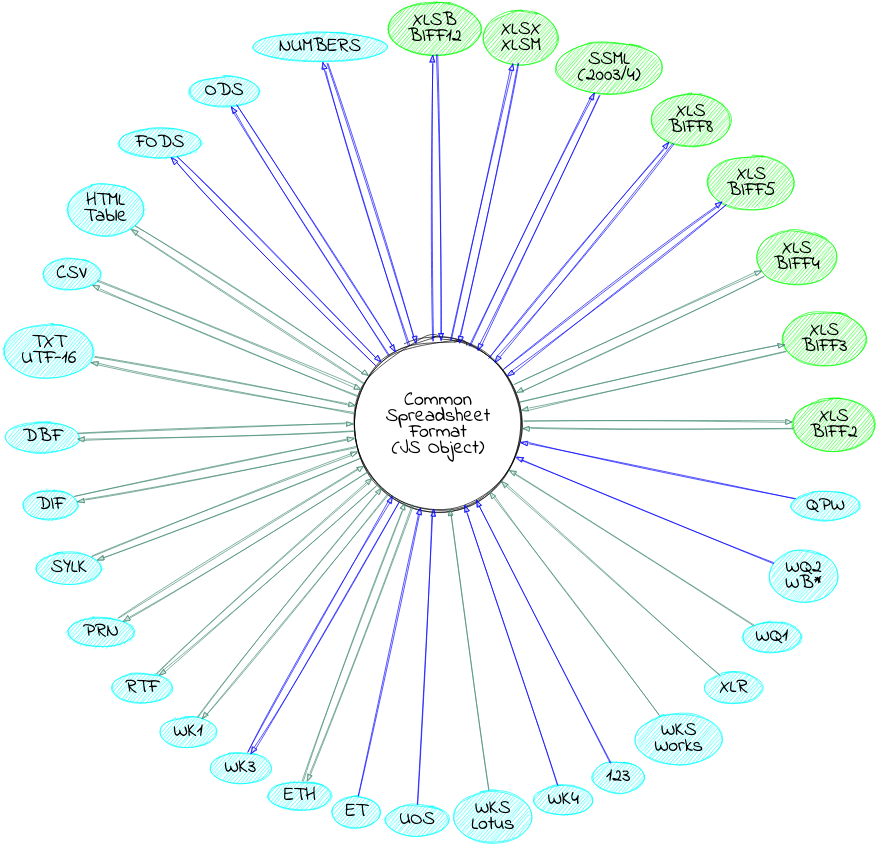 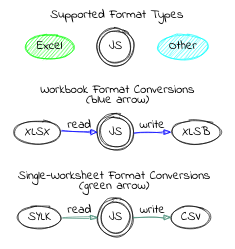 Features not supported by a given file format will not be written. Formats with range limits will be silently truncated:

Excel 2003 SpreadsheetML range limits are governed by the version of Excel and are not enforced by the writer.

XLSX and XLSM files are ZIP containers containing a series of XML files in accordance with the Open Packaging Conventions (OPC). The XLSM format, almost identical to XLSX, is used for files containing macros.

BIFF 2/3 XLS are single-sheet streams of binary records. Excel 4 introduced the concept of a workbook (XLW files) but also had single-sheet XLS format. The structure is largely similar to the Lotus 1-2-3 file formats. BIFF5/8/12 extended the format in various ways but largely stuck to the same record format.

Multiplan 4 "Normal" files are identical in structure to BIFF2 and use the same cell value records. There are some different record types for more advanced features like Print Settings. The BIFF2 writer generates files that can be read in Multiplan 4 and the parser can extract values from "Normal" files.

There is no official specification for any of these formats. Excel 95 can write files in these formats, so record lengths and fields were determined by writing in all of the supported formats and comparing files. Excel 2016 can generate BIFF5 files, enabling a full suite of file tests starting from XLSX or BIFF2.

BIFF8 exclusively uses the Compound File Binary container format, splitting some content into streams within the file. At its core, it still uses an extended version of the binary record format from older versions of BIFF.

The MS-XLS specification covers the basics of the file format, and other specifications expand on serialization of features like properties.

Predating XLSX, SpreadsheetML files are simple XML files. There is no official and comprehensive specification, although MS has released documentation on the format. Since Excel 2016 can generate SpreadsheetML files, mapping features is pretty straightforward.

Introduced in parallel with XLSX, the XLSB format combines the BIFF architecture with the content separation and ZIP container of XLSX. For the most part nodes in an XLSX sub-file can be mapped to XLSB records in a corresponding sub-file.

The MS-XLSB specification covers the basics of the file format, and other specifications expand on serialization of features like properties.

Excel CSV deviates from RFC4180 in a number of important ways. The generated CSV files should generally work in Excel although they may not work in RFC4180 compatible readers. The parser should generally understand Excel CSV. The writer proactively generates cells for formulae if values are unavailable.

Excel TXT uses tab as the delimiter and code page 1200.

Like in Excel, files starting with 0x49 0x44 ("ID") are treated as Symbolic Link files. Unlike Excel, if the file does not have a valid SYLK header, it will be proactively reinterpreted as CSV. There are some files with semicolon delimiter that align with a valid SYLK file. For the broadest compatibility, all cells with the value of ID are automatically wrapped in double-quotes.

Support for other formats is generally far behind XLS/XLSB/XLSX support, due in part to a lack of publicly available documentation. Test files were produced in the respective apps and compared to their XLS exports to determine structure. The main focus is data extraction.

The Lotus formats consist of binary records similar to the BIFF structure. Lotus did release a specification decades ago covering the original WK1 format. Other features were deduced by producing files and comparing to Excel support.

Generated WK1 worksheets are compatible with Lotus 1-2-3 R2 and Excel 5.0.

The Quattro Pro formats use binary records in the same way as BIFF and Lotus. Some of the newer formats (namely WB3 and QPW) use a CFB enclosure just like BIFF8 XLS.

All versions of Works were limited to a single worksheet.

Works for Windows 6.x - 9.x use the XLR format. XLR is nearly identical to BIFF8 XLS: it uses the CFB container with a Workbook stream. Works 9 saves the exact Workbook stream for the XLR and the 97-2003 XLS export. Works 6 XLS includes two empty worksheets but the main worksheet has an identical encoding. XLR also includes a WksSSWorkBook stream similar to Lotus FM3/FMT files.

iWork 2013 (Numbers 3.0 / Pages 5.0 / Keynote 6.0) switched from a proprietary XML-based format to the current file format based on the iWork Archive (IWA). This format has been used up through the current release (Numbers 12.1) as well as the iCloud.com web interface to Numbers.

The parser focuses on extracting raw data from tables. Numbers technically supports multiple tables in a logical worksheet, including custom titles. This parser will generate one worksheet per Numbers table.

The writer generates one table per sheet.

ODS is an XML-in-ZIP format akin to XLSX while FODS is an XML format akin to SpreadsheetML. Both are detailed in the OASIS standard, but LibreOffice adds undocumented extensions. The parsers and writers do not implement the full standard, instead focusing on parts necessary to extract and store raw data.

UOS is a very similar format, and it comes in 2 varieties corresponding to ODS and FODS respectively. For the most part, the difference between the formats is in the names of tags and attributes.

ET is the native format for WPS Office Spreadsheet. It extends the BIFF8 XLS format with proprietary extensions.

Many older formats supported only one worksheet:

DBF is really a typed table format: each column can only hold one data type and each record omits type information. The parser generates a header row and inserts records starting at the second row of the worksheet. The writer makes files compatible with Visual FoxPro extensions.

Multi-file extensions like external memos and tables are currently unsupported, limited by the general ability to read arbitrary files in the web browser. The reader understands DBF Level 7 extensions like DATETIME.

https://oss.sheetjs.com/notes/sylk/ is an informal specification based on our experimentation and previous documentation efforts.

There is no real documentation, and in fact Excel treats PRN as an output-only file format. Nevertheless we can guess the column widths and reverse-engineer the original layout. Excel's 240 character width limitation is not enforced.

There is no unified definition. Visicalc DIF differs from Lotus DIF, and both differ from Excel DIF. Where ambiguous, the parser/writer follows the expected behavior from Excel. In particular, Excel extends DIF in incompatible ways:

Excel HTML worksheets include special metadata encoded in styles. For example, mso-number-format is a localized string containing the number format. Despite the metadata the output is valid HTML, although it does accept bare & symbols.

Excel RTF worksheets are stored in clipboard when copying cells or ranges from a worksheet. The supported codes are a subset of the Word RTF support.

Ethercalc was an open source web spreadsheet powered by a record format reminiscent of SYLK wrapped in a MIME multi-part message.